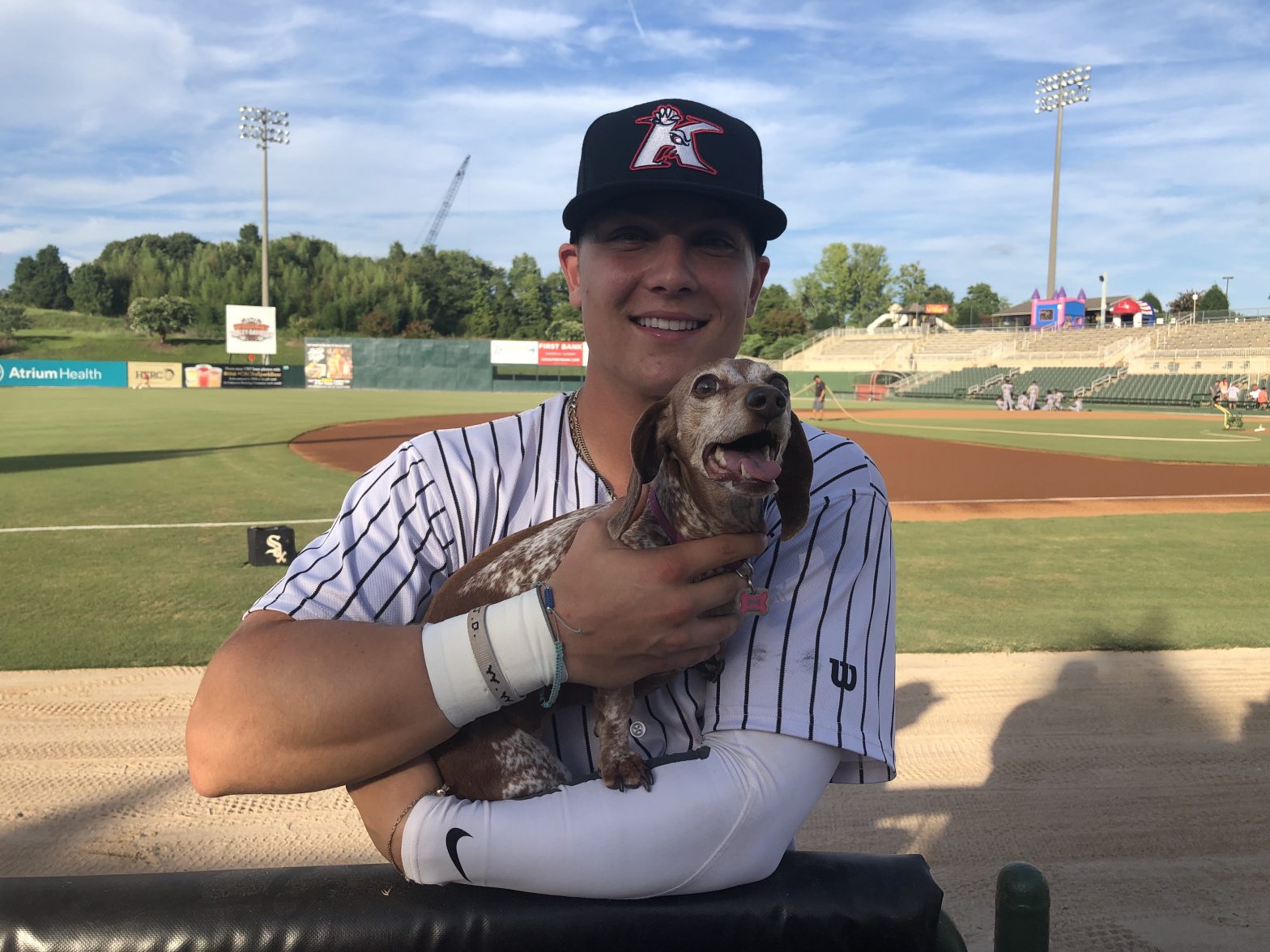 Steele Walker is a name Chicago White Sox fans need to have familiarity with, and the reasons are multiple.

First, in just two short months, his sweet, left-handed swing is likely to be spraying rockets all over the minor league fields of the South Atlantic League as a member of the Kannapolis Intimidators.

Second, the name. In “Steele Walker,” you have two baseball terms side-by-side, and a name that could easily belong to a bad guy from any 80’s action movie. In baseball scout speak, it’s about as 80-grade of a name that you will ever find on a roster.

Third, the hair. Walker possesses an amazing mane of perfectly coiffed golden tresses. He looks as if he walked off of a Hollywood movie set to go take batting practice.

There are so many superlatives one can use to describe Walker that it’s easy to get lost. He’s supremely confident, but at the same time not even the slightest bit arrogant — Walker just emits an aura of recognizing that he belongs. He’s also very spiritual, and appreciative for the chances he has been given, as he is very quick to thank God in his interviews.

However, don’t expect this laid-back, God-fearing Texan to be a pushover, because when he is on the baseball diamond his personality goes through a Jekyll and Hyde transformation. Walker shared his on-the-field mantra with South Side Sox: “Explosiveness is something I want to bring; I am going to be explosive.”

Walker was scooped up by the White Sox in the second round of the 2018 draft (No. 46 overall). He was very surprised to be drafted by the White Sox, explaining that he had what felt like 10 meetings with every major league team, except the South Siders. He notes that an assistant coach at his alma mater (Oklahoma) had White Sox ties, and one scout watched him take a few swings during a rain-soaked batting practice. But the scout’s look was brief, Walker says, and ended with nothing more than a hand shake.

In retrospect, it’s safe to assume the Sox liked what they saw, as they inked Walker to an over-slot $2 million bonus and assigned him to the Arizona Rookie League.

Walker says the experience was mind-blowing, expounding, “It’s a shocking thing. It hits hard. The team gets back to Norman after being eliminated in the College World Series and you’re a college student, but then it hits you: You might never see these guys again. Then you are getting plane tickets and going to places you’ve never been. There was no graduation party, or time to absorb everything.”

Although it was an unsettling experience, Walker expresses no regrets. “I liked being thrown into the fire because I learned from it,” he says. “I’m twice as tough having gone through that experience.”

After two short stops in rookie ball (four games in Arizona, nine in Montana) Walker finished the season in North Carolina with the Low-A Kannapolis Intimidators. If the transition to pro ball wasn’t already difficult enough, Walker was also dealing with a painful oblique injury and hamstring issues, which plagued him for remainder of the season.

Statistically, the season was a letdown for the top prospect, as his slash line was a pedestrian .209/.271/.342 combined among all three assignments. However, Walker refuses to let the poor numbers define him.“After every game I ask myself two questions: Did I compete? Did I attack? If I can check both of those boxes every night, the next question is: What’s for dinner?” — Steele Walker

“Did I hit great in Kannapolis? No, but it’s not going to affect me,” he says. “I know who I am, and what I am capable of,” adding that he keeps his expectations simple, and they have nothing to do with statistics. “After every game I ask myself two questions: Did I compete? Did I attack?” Walker says. “If I can check both of those boxes every night, the next question is: What’s for dinner?”

In spite of keeping things simple, Walker is quite a baseball philosopher, the kind of player that Chicago fans are really going to embrace. Whether on or off the field, Walker freely shares his thought processes: “Baseball takes mental toughness. It’s easy to get lost in the mechanics of the swing, or the numbers. It’s a never-ending cycle. You can drown in it.”

Walker also recalls a moment during the fall instructional league, when White Sox instructor Doug Sisson helped him by reinforcing the good things he saw rather than tweaking his mechanics. Walker says Sisson told him, “Let your swing be free. We drafted you where we did for a reason. We lined up your swing and compared it with the other top guys in your draft class, and we’ll take yours every time.”

In the batter’s box, the 5′ 11″, 195-pound Walker has a very clean, short and quick path to the baseball. He places his feet in a neutral position, and occasionally lifts his front heel slightly off the ground, while also tapping the bat against his left shoulder, before setting it in the attack position as the pitcher begins his motion. When Walker decides to swing, it is a very fluid but explosive movement; he doesn’t take many “excuse me” swipes at the baseball and he doesn’t get cheated. When it comes to hitting approach, Walker emphasizes keeping it simple, but he does try to pick up the pitcher’s tendencies and use them to his advantage.

Don’t let the Kannapolis numbers fool you: Walker is extremely capable of being an offensive force. As a junior at Oklahoma, he led the team in nearly every offensive category including batting average (.352), homers (13), RBIs (53), and on-base (.441) and slugging (.606) percentages. (Keep in mind, Walker’s Oklahoma team also rostered the No. 9 overall pick in the MLB draft, eventual Heisman Trophy winner Kyler Murray.) Additionally, Walker was a nominee for the 2018 Golden Spikes Award, and as a member of the 2017 USA baseball collegiate national team Walker was named MVP in two series victories (over Chinese Taipei and baseball powerhouse Cuba). As a member of Team USA, Walker’s .333 batting average bested several other high-profile players including, Travis Swaggerty, Nick Madrigal, Andrew Vaughn and Seth Beer.

Walker sees himself as a No. 2-5 hole hitter who can drive the ball into gaps or hit it out of the ballpark: “I’m an attacker, not a slap hitter.”

In the outfield, Walker says he has “All the confidence in the world” in his defense, and relishes the opportunity to showcase it. In 30 minor league games, he has yet to make an error, and his career fielding percentage at Oklahoma was .994. Although he sees himself as a true center fielder, Walker says he’ll play whatever position it takes to crack the lineup.

Another thing Walker acknowledges is the challenging adjustment to minor league life. “The talent gaps here are not as wide as you might think,” adding that every pitcher is like a collegiate Friday or Saturday night starter and oftentimes the separation between players is strictly based on consistency and mental toughness. Overall, the biggest adjustment for Walker has been getting used to the grueling travel schedule. “We’re not getting on planes, we’re on buses, traveling all night,” he says. “Getting to bed at 8 a.m., then going to the ballpark between 1 and 3 p.m. to get our work in before a 7 p.m. game.”

This offseason Walker has had a chance to rest and recover from his injuries, with an offseason routine of weight training, running and cage work helping him regain his explosiveness.

Recently, Walker was invited to join several other White Sox top prospects on a team-building visit to the Dominican Republic. He found the experience rewarding, and also enjoyed the opportunity to glean wisdom from some of his more seasoned colleagues, like Eloy Jiménez and Seby Zavala. Walker recalled a story Jimenez told him about starting last season 0-for-10, and how the slugger reinforced that you have to stay strong mentally and continue being a competitor during the cold streaks that are so synonymous with baseball.

With his injuries and whirlwind draft experience firmly behind him, Walker is expected to begin the 2019 season by returning to Kannapolis. Look for him to thrive during his sophomore season and have a metamorphosis in 2019, much like the one his organizational teammate Luis Gonzalezexperienced in 2018. Walker looks to be one of the most exciting players in the South Atlantic League this season, as a shutdown defender in center field and a force in the middle of the Intimidators lineup.