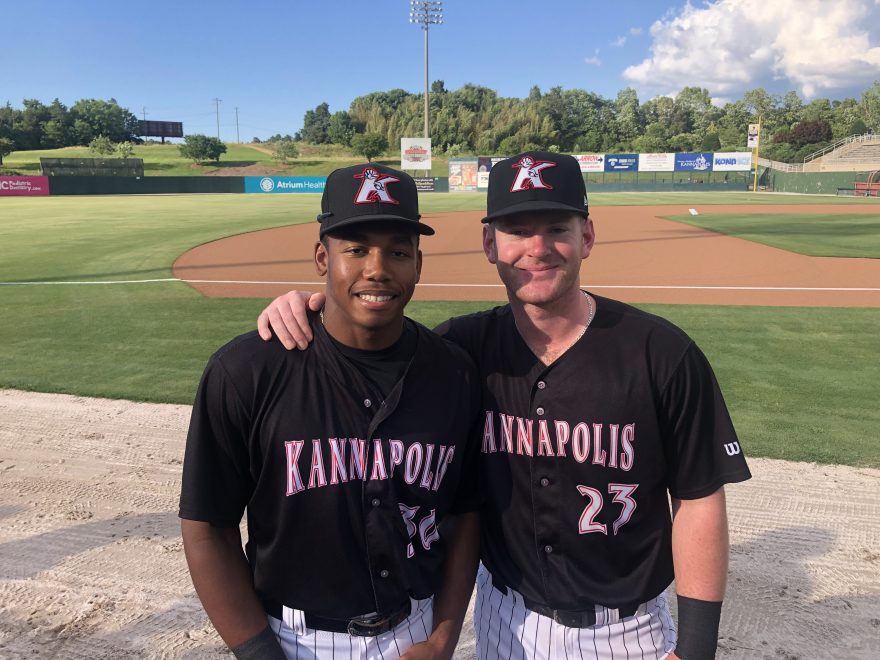 Some high-profile prospects that have a chance to spend time with the 2019 Kannapolis Intimidators include:

Amado Nunez-Nunez was signed as an international free agent out of the Dominican Republic in 2014 for $900,000.  The 21-year-old infielder should get a crack at full season baseball after hitting .357 with a .962 OPS with 6 HR and 52 RBI at Great Falls in 2018.  Defensively he is a work in progress as he is trying to find a positional home (he has played shortstop, third base, and second).  The error totals are alarming, but one of his organizational teammates explained, “He can pick it and has a plus-plus arm. Most of his errors are on throws and come from spiking the ball or air-mailing it to first base.  Sometimes when you have that kind of arm strength you try to do too much.” The same teammate also talked about Nunez improved offense, “His hitting got better last year because he’s healthy and got the reps he needed to improve, and he stopped focusing on trying to hit home runs. He hits the crap out of the ball and barrels it 90% of the time.”

Gunnar Troutwine-Troutwine was selected in the 9th round of the 2018 draft and took a significantly under slot 10K bonus as a senior sign (very similar to Craig Dedelow, the 10th round pick in 2017).  He hit .316 with 2 home runs at Great Falls, but his hitting approach and strike zone judgement are said to be stellar.  He finished second on the Great Falls roster with 19 walks in only 117 at bats, while striking out 20 times.  He strikes me as the kind of player that new White Sox hitting coordinator Matt Lisle may be able to tinker with to optimize his power potential as Lisle has emphasized lifting the ball in his teaching, prior to becoming a White Sox staffer.

Lenyn Sosa-Another international signee, Sosa has shown polish beyond his years as he has played and succeeded at each level to which he has been assigned despite being younger than most of his competition.  He will enter the 2019 after just celebrating his 19th birthday.  He put together a .293 AVG .317 OBP and .723 OPS slash line at Great Falls, but the most encouraging statistic was his very low 12.7% strikeout rate over two seasons and two levels at rookie ball.  He also displayed slick defensive chops as he only made 7 errors in 65 games while spending time at shortstop, third base, and second base.

Bryce Bush-This may go down as the greatest coup of the 2018 draft as the White Sox were able to acquire Bush’s services in the 33rd round and pony up a 290K signing bonus to get him to forego his college commitment to Mississippi State.  Bush possesses a tantalizing offensive profile and his Perfect Game profile notes “huge power potential.”  Defensively he is said to display stiff actions at third base, but as a teenager there is plenty of time for this skill to develop as the physical tools are there.  In 14 games in the Arizona Rookie league Bush punished pitchers to the tune of a .442 AVG .538 OBP and 1.143 OPS, perhaps even more exciting it the fact that he struck out only four times while walking eight.  This performance earned Bush a promotion to Great Falls where he still held his own (.250 AVG .327 OBP .713 OPS) despite being approximately two and a half years younger than his average competitor.  There appears to be a log-jam on the right side of the Kannapolis infield, but there is a good chance Bush will see time there in 2019.

Jonathan Stiever-Following a recent trend of theirs, the White Sox selected Stiever from Indiana University in the 5th round of the 2018 draft.  He sports an athletic profile, having been an accomplished high school football player in his home state of Wisconsin prior to pitching for the Hoosiers.  He signed for a full slot value bonus of $386,800 and reported to Great Falls.  At Great Falls Stievers displayed swing and miss stuff striking out 39 batters in 28 innings while pitching his way to a 4.18 ERA and 1.14 WHIP.  The item of interest that most intrigues me most about Stiever was a start he had during his sophomore year of college against baseball powerhouse Oregon State.  Stiever went toe-to-toe with Luke Heimlich (one of the Nation’s best collegiate starting pitchers), but came out on the losing end of a 1-0 pitcher’s duel.  In that contest, revered college hitters Nick Madrigal, Adley Rutchman, Trevor Larnach, and Cadyn Grenier combined to go 1-12.  For anyone that doesn’t understand the gravity of this, Madrigal, Larnach, and Grenier were all first round selections in MLB’s 2018 draft, and the current buzz suggests Rutchman may go 1-1 in 2019.  If there is one thing not to like about Stiever, White Sox fans will be disappointed to find out that he is a huge Green Bay Packer fan as verified by his Twitter timeline.  There may also be questions about his conditioning after reading a tweet he composed in 2013 saying, “Not sure if I’ve moved a total of 50 feet today.” (This was typed with tongue planted firmly in cheek) This young man seems as all-American as Sox fans could ever wish for.  I’m looking forward to his full season debut.

Konnor Pilkington-Pilkington was selected by the White Sox in the third round of the 2018 draft from Mississippi State University.  According to his bio page on the MSU website his accolades include being a member of the 2017 USA Collegiate National Team and being the #2 SEC prospect in the 2018 draft.  As the ace of his college staff he led the team in strikeouts with 111 and batting average against .199.  The left-handed starter’s fastball is said to sit comfortably in the low nineties and touch 95.  At Great Falls Pilkington pitched 12 innings striking out 9 while allowing 14 hits. He sports an impressive amateur baseball resume, and a prototypical starter’s build at 6’3” 225 pounds.