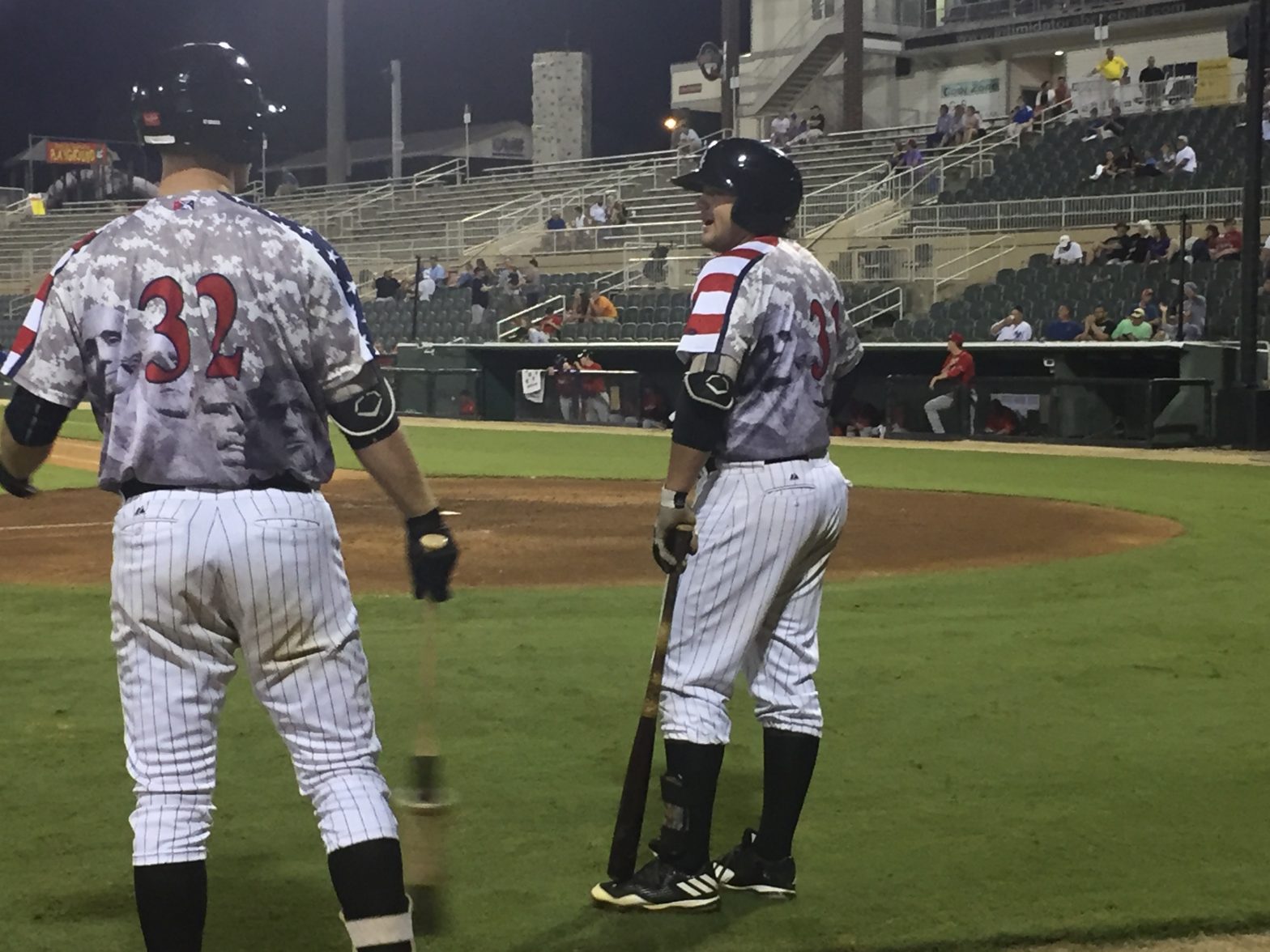 Jake Burger chatting it up with teammate Gavin Sheets

Jake Burger is a fun player to watch.  Why?  You may ask.  I’ll tell you why, because he looks as if he is having the time of his life playing baseball.  He smiles and mugs with the fans before games talking to people as if they are his lifelong friends.  He exudes confidence and plays with a youthful exuberance and relaxed swagger that is reminiscent of a young Ken Griffey Jr.  It’s as if he expects success whenever he is on the field.  When he steps into the batter’s box he knows he is going to hit the ball, and hit it hard.  0-2 count…  no problem.  3-2 count… yawn.  Bottom of the ninth with Kannapolis trailing, he wants to be the guy at the dish.  He’s Michael Jordan in the NBA finals.  He wants the ball in his hands, he’s going to take the game winning shot.  I go to a lot of minor league games and I have seen many of the top 100 prospects in the game.  Mr. Burger will be right at home in this group, quite frankly, I think he is unflappable.  When a lot of young hitters fall behind in the count, they step away from the plate, take a deep breath, and gather their composure before standing in again.  Burger does not, he plays baseball with the urgency of your best friend in a beer league softball game.  During my first look at Burger he was at the tail end of a torrid hot streak.  In the six subsequent games I have watched he has been mired in a cold streak.  Never once has he lost his composure, acted out emotionally or displayed signs that suggested the poor results are getting to him.  This mature approach to the natural ebb and flow of a 162 game season is going to serve him well as a professional ball player.

Drafted in the first round out of Missouri State in the 2017 draft he has already reached Lo-A and I believe, (although his numbers have slumped recently) that he is ready for a promotion.  His advanced bat is his calling card and he will be a source of batting average and power for the White Sox in the not too distant future.  In 177 minor league plate appearances, his K rate is 11% and his walk rate is 6%.  In the games I have observed his approach has been excellent, perhaps even too patient.  He works long at bats, and as I stated earlier, he doesn’t seem the least bit fazed by being behind in the count.  He’s a big strong kid, not like his teammate Gavin Sheets who looks like he hits the gym every day.  Burger looks “farm boy strong”, like a stocky kid who throws hay bales all day long.  Burger has a body molded along the lines of Kyle Schwarber (listed at 6’2”, 210 but I would guess he weighs closer to 230).  Despite the large frame, he can pick it at third base and I witnessed him make a fantastic catch on a foul ball near the dugout.  This catch required concentration, athleticism and fearlessness.  His arm across the diamond also rates above average for both strength and accuracy.

The bat however, is going to be the tool that writes his check.  He has big power, great bat to ball skills, and excellent plate coverage.  I am not concerned about his recent slump.  The weather in North Carolina has been very hot and Jake has been on a whirlwind tour since being drafted.  Between his minor-league season and his college season he is nearly 100 games in which is probably significantly more than he is accustomed to.  The Intimidators are host to a wealth of talent this year and Burger is the offensive player that excites me the most.  I believe he will be a first division starting third basemen for years to come.  If he stays on top of his conditioning I think we will see him in an all-star game before long.  With his cool demeanor and obvious zeal for the game, I can’t wait to see him wearing a major-league uniform on the south side of Chicago.

Follow up: Burger is chomping at the bit to return to the field after tearing his achilles not once, but twice during the 2017 off-season.  He will more than likely be assigned to the Hi-A Winston-Salem Dash.  I hope he can stay healthy and re-establish himself as a top prospect in the organization.

Baseball scout school alum. White Sox insider; baseball writer @dailywhitesox gauging my self worth from your likes and clicks.

Sox fans listen in on this interview with White Sox starting pitching prospect Chase Solesky. He’s a terrific kid, a hard worker and very knowledgeable about his craft. This podcast will help you get to know and appreciate him.

We go over a ton of topics from Tom Brady, Scotland/Ireland, prepping for the upcoming season and more!

Several organizational correspondents at Prospects1500 collaboratively ranked the farm systems. Our White Sox ranked lower than where they deserved to be. There is still work to be done but this year I expect a decent jump with several emerging players.

28 @Prospects1500 writers each ranked the farm systems 1 through 30. We then aggregated points to come up with our 3rd Annual overall site systems ranking. Check out the final results as we count them down from #30 to #1. #MiLB #prospects https://www.prospects1500.com/?p=42721

Sox fans that love the minors and the future of our organization should listen in on this interview with Birmingham Barons SP Chase Solesky. He’s a smart and candid dude.

Had a long, very interesting conversation with Mark Sheehan yesterday. He’s a pitching coach (Tom House disciple) who worked under House’s tutelage for 12 years. He has been coaching Noah Schultz since he was 14 YO.

Fascinating fact: it’s common knowledge that Jesse Owens embarrassed the Nazis by breaking world records and winning gold medals at the 1936 olympics. But… did you know (continued)