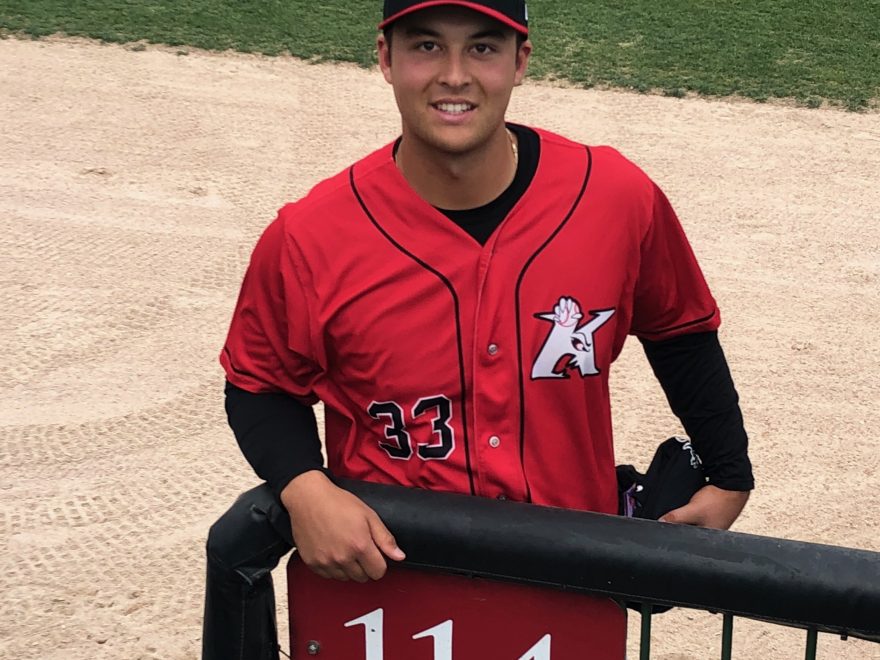 This article originally appeared on the Notes From The Sally website (April 2018) it has been updated to reflect Yurchak’s current performance.

Kannapolis Intimidator’s first baseman Justin Yurchak is a baseball player I am very excited about this season.  Taken in the 12th round of the 2017 MLB draft, Yurchak signed for an over slot bonus of $150K and Proceeded to Great Falls (Advanced rookie ball) where he mashed his way to a stat line of .345/.448/.520/.968 OPS.  And walking more times at 43 than he struck out, 33.   As I was extolling the virtues Mr. Yurchak on my Twitter feed, one of my followers asked the question, “how do we know this guy won’t be like Aaron Schnurbusch”.  White Sox fans might remember the buzz over Schnurbusch after he mashed against Pioneer League pitching during his draft year (2016) and fell on his face in 2017.  Schnurbusch is currently out of professional baseball.  There are some parallels in their stories, but I want to explain why I am certain that Yurchak is going to continue hitting.

Looking at the Great Falls numbers in more detail:

The stat lines are eerily similar for the two players, and when you throw in the extremely athletic Schurbusch’s 18 SB, he seems to be a fantastic young player.   However, after witnessing his struggles in 2017 it is abundantly clear that Schurbusch was simply having a magnificent outlier season.  His skill set never changed between his college years and his minor league years.  The swing and miss was his Achilles heel and even when he mashed in the Pioneer Lg, strikeouts were an issue.  Schnurbusch was an immensely talented Junior College baseball player.  However, when he transferred to a Division One program, his inability to hit advanced pitching started to show through.  Here we contrast Yurchak’s D-1 season (his freshman year at Wake Forest in contrast with Schnurbusch’s senior year at Pitt).

Are we starting to see where the comparison ends? Yurchak was playing at a baseball powerhouse (Wake Forest) and doing at 18 years old what his organizational teammate couldn’t do as a 22-year-old senior year at Pitt (also in the ACC).

Now let’s examine how Yurchak performed in the wood bat Cape Cod League in 2016 while playing with some of the best collegiate players in the nation.  Below is a chart comparing Yurchak with some of his contemporaries who also played at the Cape in 2016.

Despite being the youngest player in this group of top draft picks, Yurchak held his own and the elite plate discipline was evident by his 15% walk rate.

Having had my eyes on him for the first six games of the 2018 season I believe he is going to continue mashing, as he has done at every level of his amateur and pro career.  As I write this article he is mired in an 0 for the season mini slump (0-16 with 5 K).  However, I have witnessed as he has put together several long at bats.  He nearly went opposite field in one of the first games of the year against Lakewood and in the same series he also flew out to the track in the right field power alley.  He is listed at 6’ 1” and 204 lbs but he looks a little thicker bodied than listed.  At the plate, he hits from the left side with an open stance that gives him a good look at pitches.  The open position will probably allow him to mash pitches from the middle in, but may leave him vulnerable to pitches away, particularly breaking stuff from left handed pitchers.  He maintains a rhythmic waggle throughout the setup.  When he swings, he takes a short stride and finishes with his feet in a more neutral position, his swing is balanced and he possesses excellent bat control.  The scouts I have spoken with suggest the swing looks a “little long” but they said he makes plenty of loud contact in batting practice.

At first base he will probably be an adequate fielder.  He played third base in 12 games at Great Falls making 8 errors before being moved across the diamond.  There is hope however; as he was once recognized as the 4th best high school shortstop in his home state of NY, before signing his letter of intent with Wake Forest.  He is not fleet of foot and has been replaced by pinch runners late in games this year.

Yurchak’s meal ticket is his plate discipline and hit tool.   I can envision him being a .280-.300 hitter with 15-20 home runs and a high OBP.  He will advance as far and as fast as his bat will carry him.  There is an awful lot to like here and based on his track record and what I have seen, I am betting on him to succeed.

Following up a year later; Yurchak was traded from the White Sox to the Dodgers for pitcher Manny Banuelos. Although he held his own for Low-A Kannapolis in 2018 his power numbers were disappointing (1 HR .674 OPS in 363 plate appearances). He was not overmatched as his K rate was 15% and his BB rate was 12%. In spite of this, he was sent back to the Pioneer League where he again laid waste to the pitching (.365 AVG .496 OBP 1.194 OPS with 8 HR in 147 plate appearances) before heading to a Low-A assignment with the Great Lakes Loons. At Great Lakes the power is starting to show (5 HR in 147 plate appearances) and his slash line is .305 AVG .367 OBP .886 OPS.

The Cape Cod League players I used for comparison are all in AA or higher with Adam Haseley currently playing in the major league outfield for the Philadelphia Phillies. Although the 2018 season was a let down for Yurchak, his future is still bright.

Baseball scout school attendee, White Sox insider; baseball writer. I cover baseball, the humor and satire are free. If you don’t like my wit? Don’t follow.

Your 2021 World Champion Atlanta @Braves took care of business at the MLB level. @MKelley_ND takes a look at the next wave of talent in the minors, as they stock up for another run at the title. This is his new #Braves Top 50 prospects. #ChopOn #MiLB https://www.prospects1500.com/?p=36234

Nick Yorke one of the Red Sox top prospects goes yard against the Hickory Crawdads. This kid is an amazing young hitter and dominated both levels of A ball in 2021.

This is the Red Sox Big Joe Davis. He might have the worst baseball player body in A+ ball that I have ever seen. Kid can hit though or he wouldn’t have gotten here. A fan favorite in Greenville and a fun player.