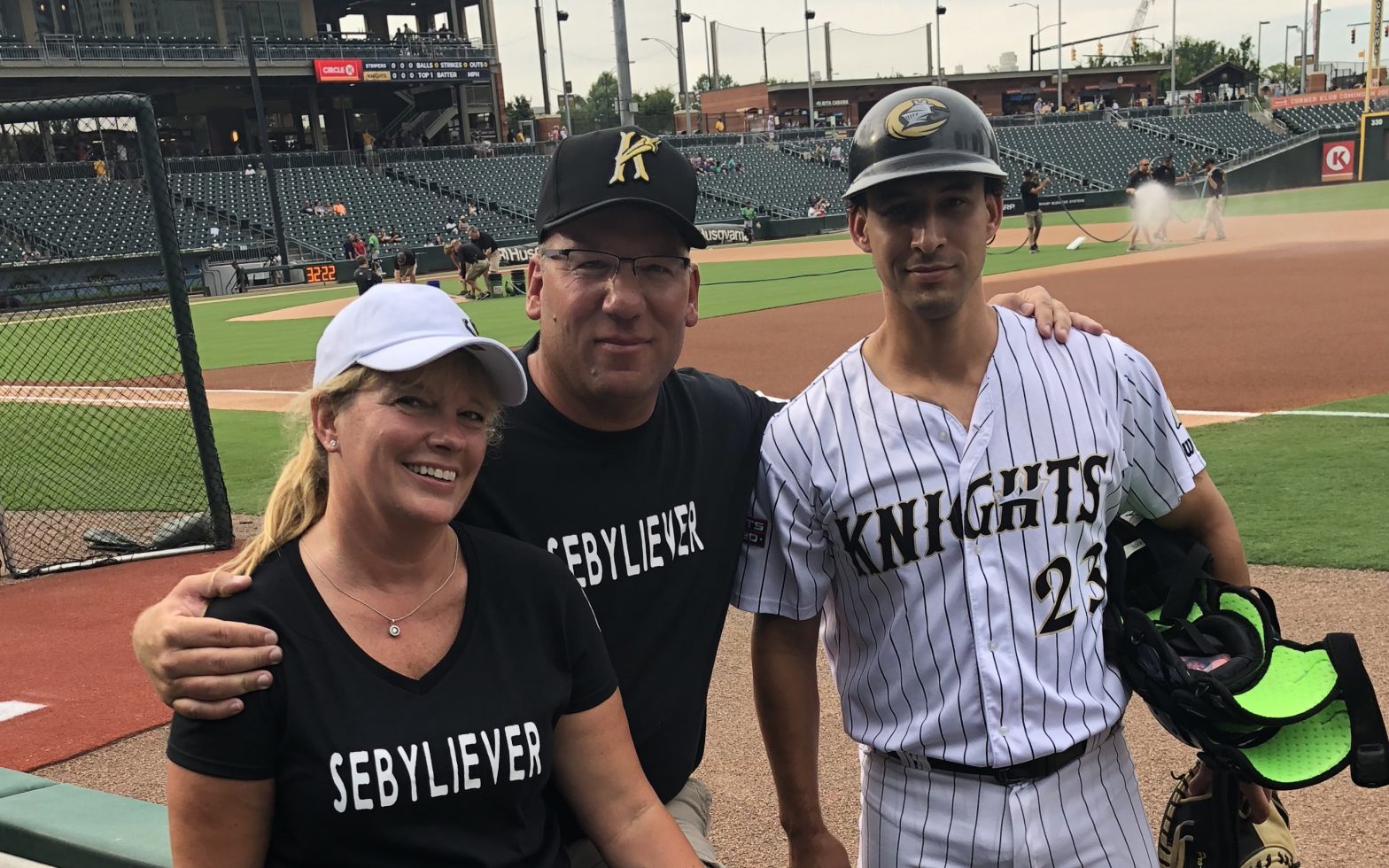 In 2016 a young catcher in the Chicago White Sox organization inspired me with his hard work, grit and determination.  That catcher Bernardo Sebastion Zavala (Seby) has gone from being a 12th round pick to becoming a four-time minor league all-star and now as the Charlotte Knights starting catcher, he is on the Sox 40 man roster and on the brink of a major league call up.  Not only did Seby practice and play hard while reaching for his goals, he was the catalyst for me to begin writing about baseball.  Since I didn’t have much of a forum or following in 2016 I’ve saved this interview for the last three years and was planning on using it in a future book.  Since I don’t know when I will have the time or the content to undertake this project I wanted to share the transcripts with you now. I’d like the White Sox fans to see who’s on deck in the organization’s minor league pipeline.

ME: Thanks for the interview Seby, I appreciate you taking the time.
ME: Tell me, when did you realize that you were going to be a professional baseball player?

SZ:  I always thought I was a pretty good baseball player.  I was never the guy with the most talent, but what I do best is grind everything out; from at bats, to games, even off-the-field stuff.  I guess I knew I had a really good chance to go far the year after I redshirted in college because of all of the information I gathered sitting with Tony Gwynn.  Sitting with him I was able to learn how to read hitters and understand their game plan so I can make them do what I want.  From there I knew if I could get physically bigger and start catching every day that I really had a chance to go far.

ME:  Do you still love the game or does being a pro just feel like a job now?

SZ:  Of course I love the game, but what I have learned to love more is the process.  There is a certain routine one must have during the season and even the off-season.  There is a higher level of urgency now that it is a “job,” but at the end of the day, it is a game and you have to have fun doing it.

ME:  I know California is a hot bed for talented baseball players, were you the best kid on your high school team?

SZ:  I wish I could say I was the best player on my high school team, but my high school has had a few big leaguers and hopefully some future big leaguers.  Most recent is Rio Ruiz from the Braves who got called up late this season.  Playing with him on my team was awesome because we all knew he was a special player.

ME:  Was coach Gwynn the guy who recruited you?  What was he like?

SZ:  Coach Gwynn was not the person doing the recruiting at the time when I went to SDSU.  He was an amazing person, he cared about everyone on a personal level. (NOTE:  Seby has a home plate tattoo on his left shoulder with coach Gwynn’s major league #19 in the center)

ME:  You told me you caught bullpens for Stephen Strasburg before, tell me about that.  Does catching for the guys that blow up the radar gun hurt your hand?

SZ:  Yes, he would come by SDSU sometimes and throw bullpens.  I wasn’t the only one to catch for him, it was whoever was available.  Jake Romanoski who is playing very well in the Red Sox organization would also catch him.  Usually if someone is blowing up your hand, you’re catching the ball wrong.  I’m not saying it doesn’t happen because sometimes the pitcher might cut the ball or have a little sink and yeah, it could hurt, but like most catchers we work really hard everyday to make sure we do things right so that doesn’t happen.

ME:  I know you got a decent signing bonus (100K) but there are a lot of misconceptions the fans have about money.  I think there is a perception that you guys are rich ball players.

SZ:  Yes, the signing bonus (after taxes) is nice to have and you don’t have to worry as much as some of the other players, but it is nothing that allows me to just sit back and relax.

ME:  Did you know the Sox were going to take you on draft day, or were you expecting someone else to call your name?

SZ:  I had no idea the Sox were going to pick me or were interested in me.  I communicated more with other teams the day before the draft.  I think I talked the most with the Royals.  (NOTE:  The scout that signed Seby compared him to Jorge Posada)

ME:  Do you work in the off season or devote your time to training for the next season?

SZ:  Last off season I did not have a job, but this off season I plan on working a little bit.  The off season could possibly be harder than the season because I’m working hard to gain the weight I lost and then some.  Gaining weight is almost a full-time job because of the way my body type is. (NOTE:  Seby’s first full season in the North Carolina heat he caught approximately five days a week and experienced significant weight loss)

ME:  At this level how much instruction is really happening?

SZ:  There is instruction going on every day, but I think the best instruction one can get is actually from themselves and learning from their mistakes.  Someone can tell you how to do something and it may come easy, but in a stressful situation you might crack and forget or maybe not be able to complete the task at hand.

ME:  Do you live with a host family?  What is the experience like?

SZ:  I do not live with a host family.  Kannapolis had host families that would provide certain things for us.  If we needed to borrow a vacuum, dishes, they let a couple guys borrow a car, things like that, they would assist us however possible.

ME:  Are there any times you feel overmatched and think “damn, this guy is too good?”

SZ:  There are many times when facing someone you say “dang, that guy has a good pitch, or made a good play.”  I think knowing or understanding what the opponents skills are will enhance your own game against them.  If you know a pitcher has a really good slider that he uses with two strikes, you try to hit the fastball before he throws his money pitch.  It’s about taking away his strengths.

ME:  How do you kill time on the bus or in the hotels?

SZ:  There is definitely a lot of time to kill before games.  In between batting practice, long bus rides.  I like to stay competitive playing cards or video games.

ME:  I think I read that you majored in criminal justice and wanted to be an FBI agent if baseball doesn’t work out.. true?

SZ:  Yes, Ive always been interested in protecting this country.  I wanted to go to the Army right out of high school.  After telling that to my dad who was alright with the idea, said I could do that and he would be happy.  The only exception was I was going to college first.  So I decided to continue playing baseball and always have the military/government job in the back of my head.

ME:  What is the big difference in talent from one level to the next:

SZ:  I think the difference between every level is consistency.  Whether it is a pitcher pumping strikes more consistently, or hitting with a more consistent swing.

ME:  One last question, you played for a hall of famer, caught bullpens for a big league all star. Those are pretty cool experiences, who is the coolest guy you’ve met in the game?

SZ:  I enjoy talking to anyone who has played in the big leagues.  Even if the player only got one day in the big leagues.  Everyone who has made it has something to offer.  There is such a long list of players and coaches that I’ve learned from in the first year and a half. I would think I would still have to say Tony Gwynn was the most influential because I think I was so behind in my baseball IQ that he jump started it and made me realize my full potential.  He made me think like a big leaguer.  He made me ask the right questions.  I think I am where I am now because of him.

This interview was conducted on 10/10/2016.  As I reflect, all I can remember is how strong Seby’s work ethic was (still is), and how unselfishly he plays the game. He made me a “Sebyliever” in 2016 and he continues chopping down the doubt tree of those that believe he isn’t a major league caliber catcher. I never met the man, but I do believe that Coach Gwynn would be very proud.

Baseball scout school alum. White Sox insider; baseball writer @dailywhitesox gauging my self worth from your likes and clicks.

Sox fans listen in on this interview with White Sox starting pitching prospect Chase Solesky. He’s a terrific kid, a hard worker and very knowledgeable about his craft. This podcast will help you get to know and appreciate him.

We go over a ton of topics from Tom Brady, Scotland/Ireland, prepping for the upcoming season and more!

Several organizational correspondents at Prospects1500 collaboratively ranked the farm systems. Our White Sox ranked lower than where they deserved to be. There is still work to be done but this year I expect a decent jump with several emerging players.

28 @Prospects1500 writers each ranked the farm systems 1 through 30. We then aggregated points to come up with our 3rd Annual overall site systems ranking. Check out the final results as we count them down from #30 to #1. #MiLB #prospects https://www.prospects1500.com/?p=42721

Sox fans that love the minors and the future of our organization should listen in on this interview with Birmingham Barons SP Chase Solesky. He’s a smart and candid dude.

Had a long, very interesting conversation with Mark Sheehan yesterday. He’s a pitching coach (Tom House disciple) who worked under House’s tutelage for 12 years. He has been coaching Noah Schultz since he was 14 YO.

Fascinating fact: it’s common knowledge that Jesse Owens embarrassed the Nazis by breaking world records and winning gold medals at the 1936 olympics. But… did you know (continued)